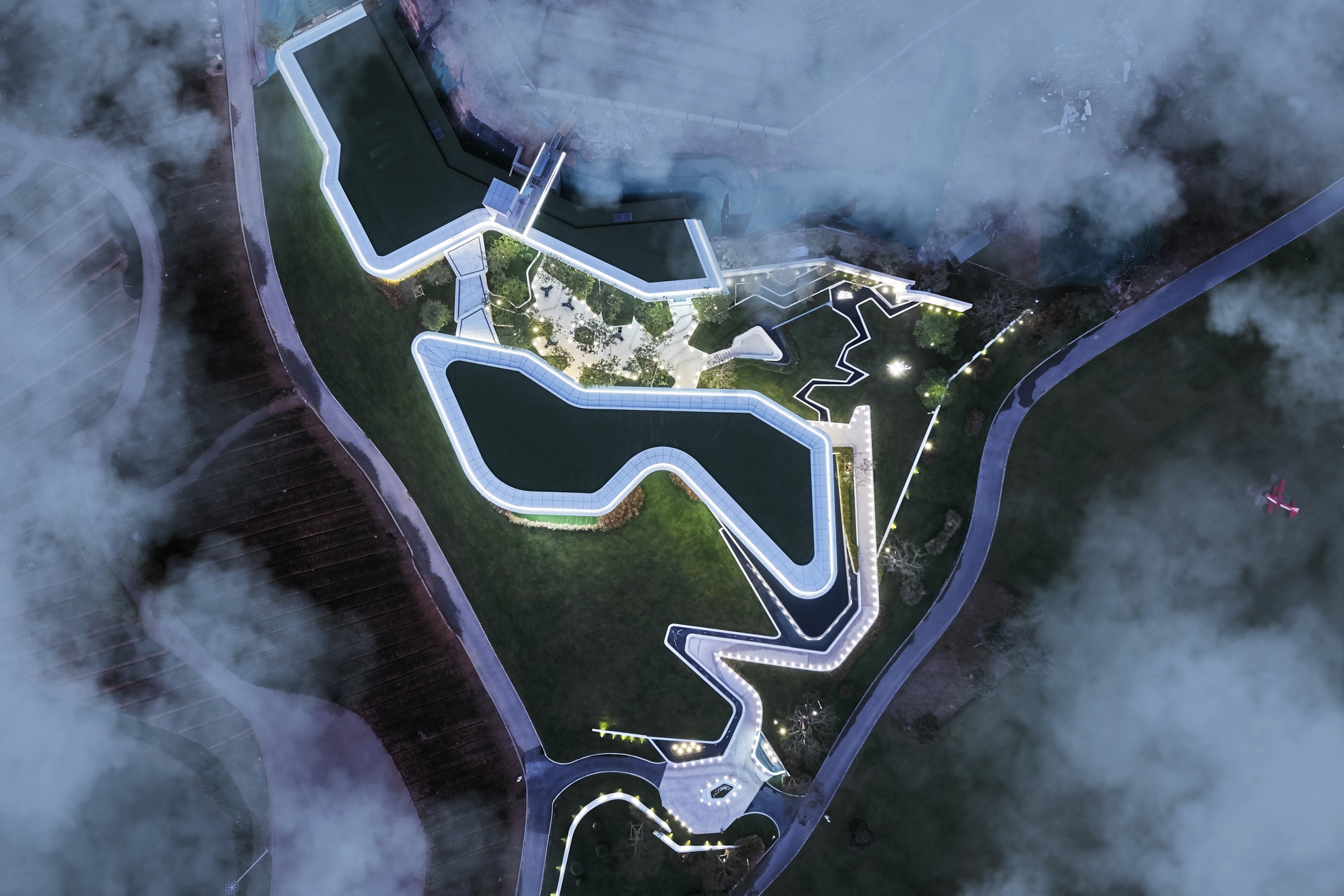 When architectural lighting is drawn from inspiration and need, the outcome is an extraordinary design that captivates and also in turn inspires its spectators.

To recognize these innovative and creative efforts given in line with lighting design in an exceptional capacity, LIT Design has awarded these 5 breathtaking exterior architectural illumination projects.

With a people-oriented and environmentally conscious architectural design, Vanke Cloud City is an already impressive building in itself. Integrate a well-thought lighting display and the remarkable architecture further shines through on all four corners of Nashan District’s skyline.

The 280.8-meter super high-rise building has more reasons to stand tall as it is the Winner in the Exterior Architectural Illumination Category of 2020.

The design intention for Vanke Cloud city to be a landmark of Cloud City is without challenges as the innovative design should meet the needs while having to satisfy strict demands of lighting distribution and budget constraints.

The final lighting design uses LEDs and is automated by a system that will activate or deactivate the lights at a given schedule, allowing the structure to save on energy. Another reason for the control is to prevent creating additional light pollution during migration months that will affect birds traversing the area. 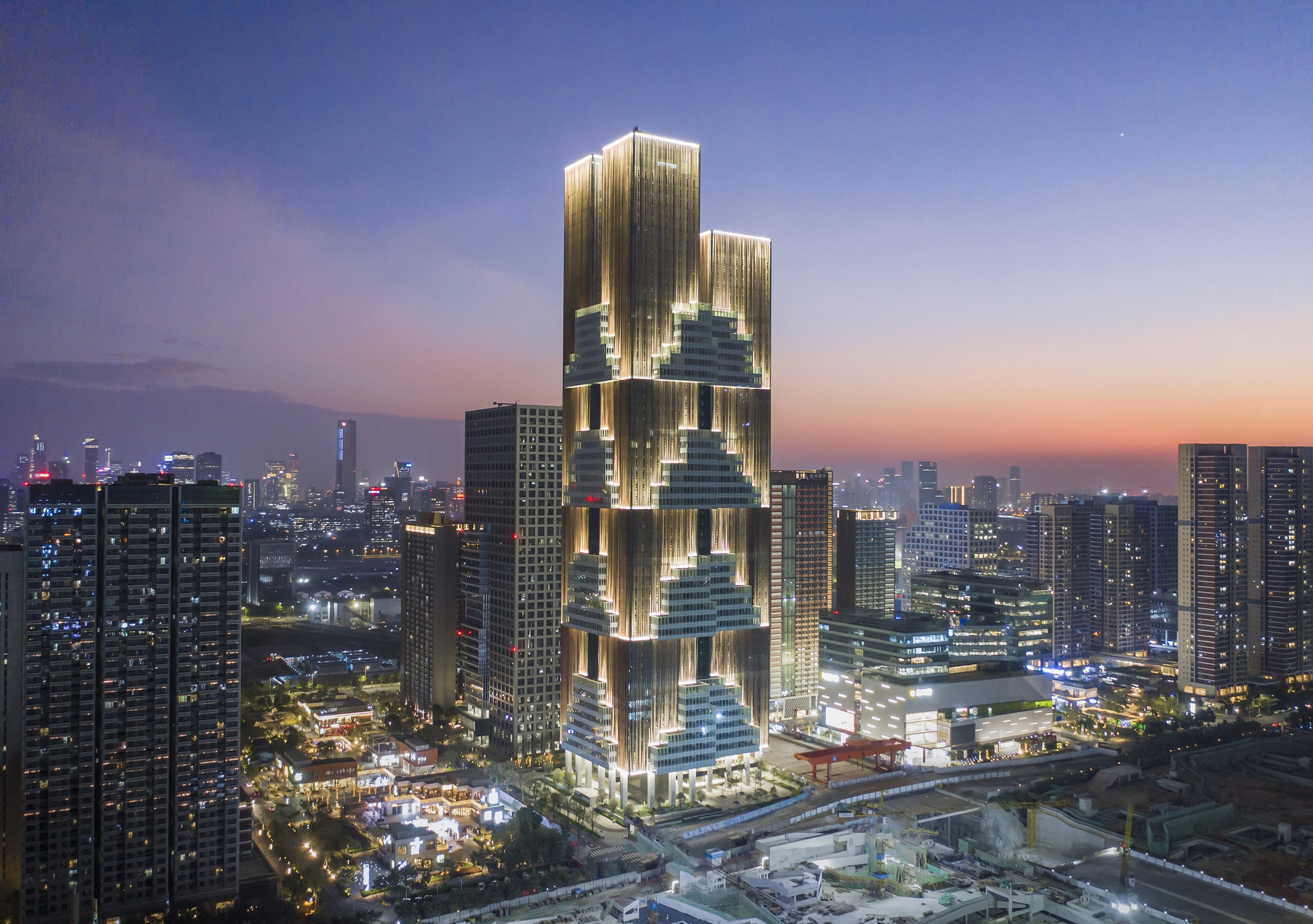 As a test case for estate projects, the structure was made on top of Zijinshan Park on a hill, following the “super flat” design. The structure integrates office functions, tourisms, and exhibitions. The idea is to push the envelope for what is possible between indoor and outdoor lighting.

While the design aims to obscure the boundaries between indoor and outdoor, light pollution is a challenge for this project. To mitigate this issue, the structure is equipped with the necessary equipment to control timing and light intensity. The lights themselves are expected to work at least 80,000 hours, and all are recyclable. All in all, the result is a highly efficient, functional, and structure that is a work of art. With its masterful use of smart lighting design, the project won the Exterior Architectural Illumination category.

From China to Bangkok, the 314-meter-tall King Power MahaNakhon standS as the tallest skyscraper in the country. The challenge of lighting a literal giant piece of art seems to be the focus of this project. The structure is equipped with light panels, controlled by software for animating, based on the city’s day and night cycle. Since the structure follows a more eroded geometry rather than the traditional beacon approach, the light panels are installed on this “eroded” section. Another recipient of Exterior Architectural Illumination is the King Power MahaNakhon in Bangkok designed by SEAM Design.

The white scheme imitates the color temperature of the evening sky over the city. The whole project aims to establish a connection between this and nature. But it does not end there, this project lies the ambitious goal to establish Bangkok as Southeast Asia’s design capital. 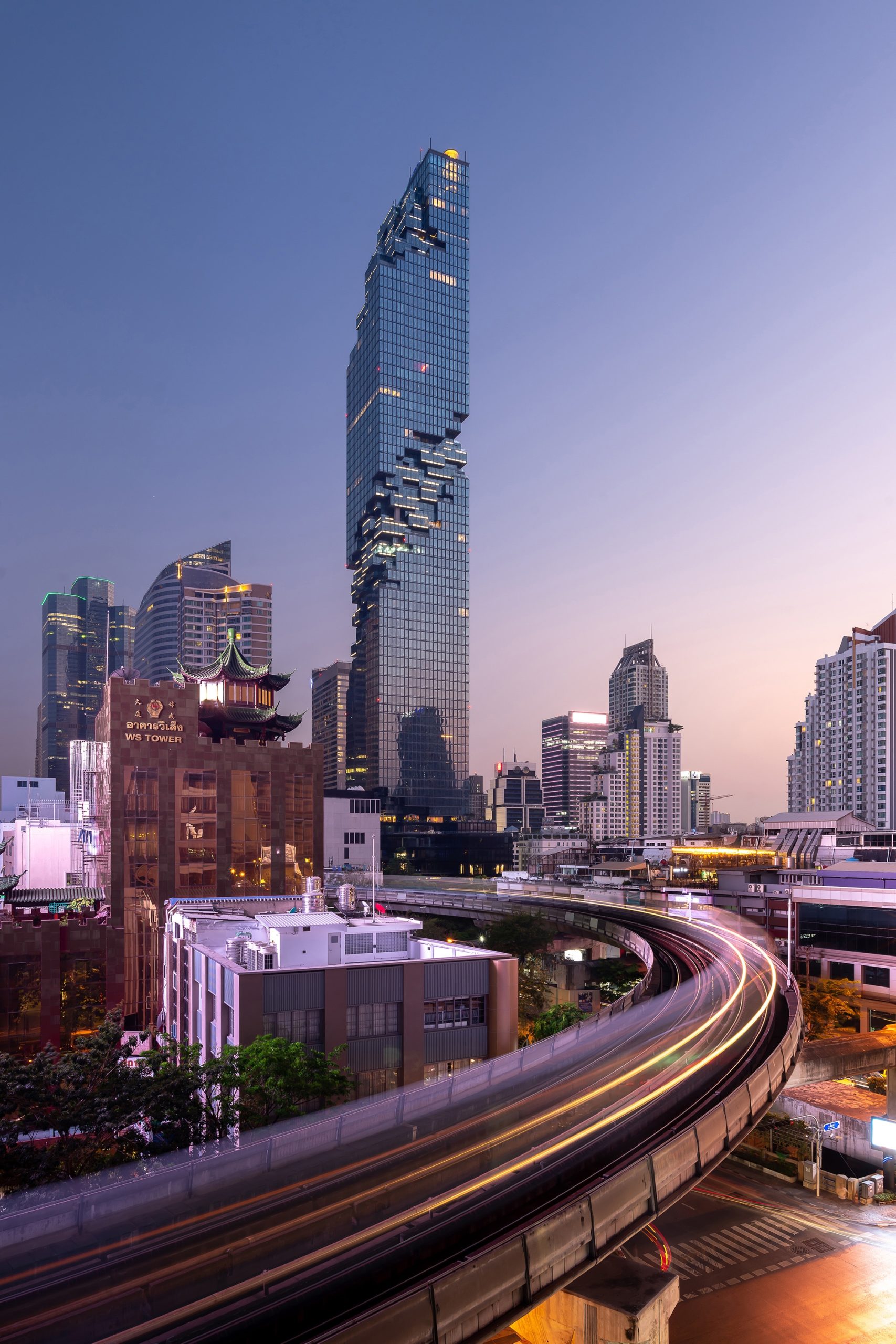 Designed by Carla Wilkins & Elena Bayda, the project also boasts 100 innovations while saving 40% of energy.  Using light intensity between the interior and exterior lighting to define the volume of the tower is an effective way technique. This is done by modifying the frame lighting and edge lighting, respectively. The remarkable lighting design also consider

A special part of the tower lighting was developing the detailed concept of aircraft obstruction lights and “bird-friendly” lighting and their integration into the overall concept. The project is also LEED platinum-certified making it one of the five most environmentally friendly skyscraper in the world. 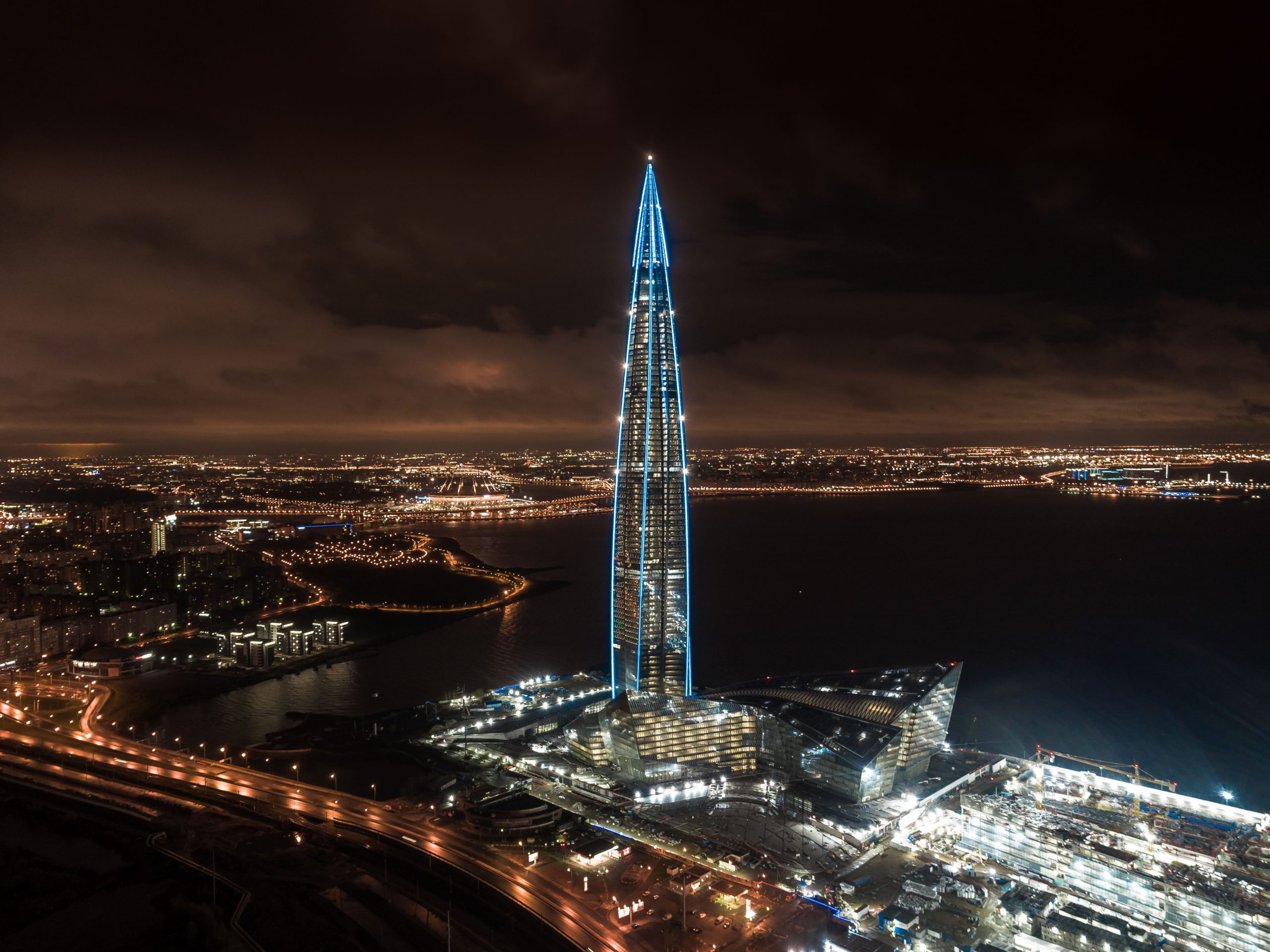 The eye-catching arts center is located in Jiefagin CBD, Yuzhong District, designed by China Architectural Design & Research Group in 2007, and constructed in 2013. Further improvements on the lighting design particularly on the art center’s facade were carried out in 2018 as was delegated by the client of the Chongqing Yuzhong District Management Committee. 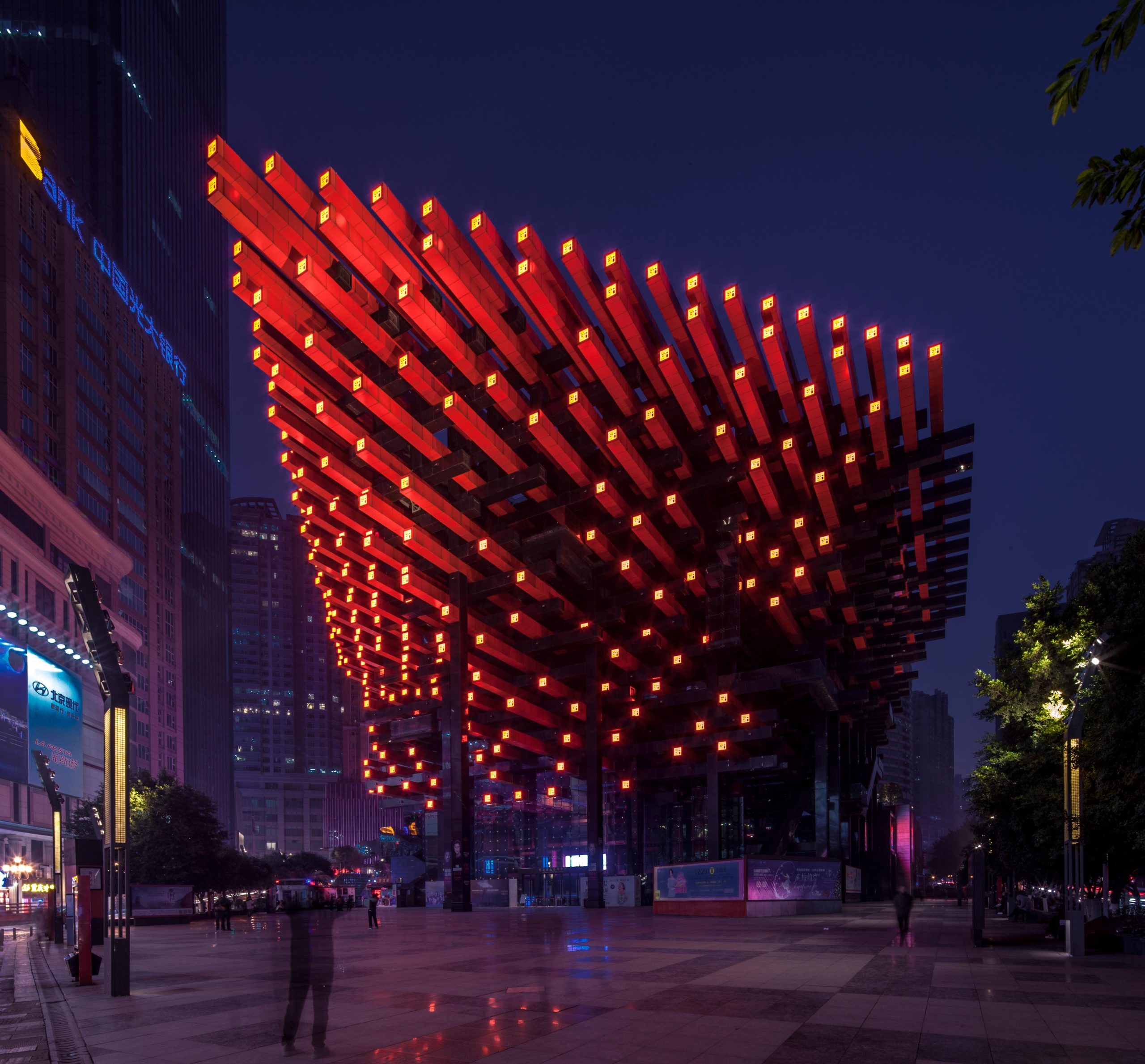